I’ve recently been busy on an interesting little side project that addresses a concern I hear time and time again. On receiving an instant message, Lync will show a popup “toast” message, play a sound, and flash the taskbar icon:

If you’re sitting at your desk, staring at the screen, this is usually enough to get your attention. Otherwise, you can return to your screen and the only indication of a new instant message is an orange icon in the taskbar – easily missed, especially if you happen to be returning from a pub lunch.

The actual request I get from customers is “Can you automatically bring the conversation window to the front when I receive a new IM”. This initially sounds like the right solution, but isn’t a great user experience, for a couple of reasons: 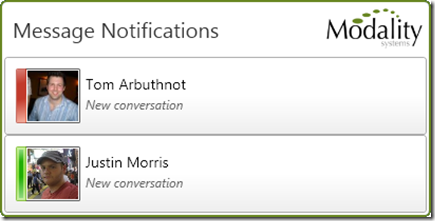 What’s more, because SuperToast doesn’t automatically bring the conversation window to the front, it doesn’t break MPOP. In fact, it doesn’t mess with any of the standard Lync behaviour – just augments it.

We’ve been using SuperToast internally at Modality Systems for a few weeks now, and it’s proving to be a very useful add-on to Lync. Being the nice guys and girls we are, we’ve decided to give it away – you can get your hands on a free copy of SuperToast at http://www.modalitysystems.com/software.

And don’t worry, I haven’t forgotten that this is Code Lync – I’ll be blogging about SuperToast’s internals in my next post.