Getting Started – An Overview of Lync’s APIs

By far my most popular Lync-related answer on Stack Overflow has been this one, where I give an overview of the functionality provided by some of the Lync APIs.

I’m taking this to mean that there are a lot of developers out there who want to get started with Lync development, but are finding it difficult to know where to start – probably partly due to the number of APIs and extensibility points that are available. I’m not saying this is a bad thing, just that it can be daunting to a developer coming fresh to the technologies.

Microsoft Lync Server has a wide range of APIs and extensibility points for the client-side, middle-tier and server-side. These enable a variety of powerful solutions to be built on top of the core platform.

The Lync 2010 SDK is the current client-side SDK for Lync 2010. It contains the Lync 2010 API, the Lync controls for WPF and Silverlight, sample applications, documentation, and an MSI for the redistributable.

When Lync is in UI Suppression mode, the user will not be able to start the Lync client by running the executable – instead, an application using the Lync 2010 API must be responsible for starting Lync and providing all UI for Lync-related features. It is not possible to display any of the standard Lync UI when in UI Suppression mode, so it really is up to the developer to implement all required UI, including conversation windows and contact searches. The Lync API provides access to almost all of the functionality of the Lync client, enabling powerful custom UIs to be built. Common scenarios are – creating kiosk applications, creating custom clients targeted to a subset of Lync tasks.

The Lync 2010 Controls for WPF and Silverlight provide a simple way to build clients that display information from and perform tasks with the running instance of Lync – for example, there are controls for displaying a contact’s presence and contact card, changing the logged on users status, initiating conversations and audio/video calls, and many others. They follow the UI style of the Lync client, and are templatable, so can be re-skinned easily. Applications that use the Lync Controls can also use the Lync API for any logic that is not addressed by the controls. The Lync controls do not work against Lync in UI suppression mode.

Conversation window extensions host a web page. A Silverlight application on that web page can use the Lync 2010 API and Silverlight controls to interact with the underlying conversation, and to send contextual data to the participant in the conversation. Contextual data is application-specific data that will not be seen by the users, but can be received and processed by the application in the extensibility window. This is a really powerful way to allow users to collaborate on data in real-time.

Common scenarios are – displaying additional information relevant to the conversation, allowing users to collaborate on data.

NameCtrl is an ActiveX Control that provides the Persona Menu functionality in web-based applications such as SharePoint and Dynamics CRM: 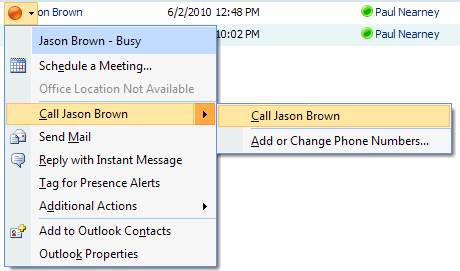 Being an ActiveX control, it is relatively simple to integrate NameCtrl into your own web pages, assuming Internet Explorer is used to access them.

Using this API, a custom application can perform many of the same tasks as Lync – for example, signing in and out of Lync, displaying contacts and presence, managing contacts and groups and starting conversations.

The Unified Communications Client API (UCCA) is a client-side COM-based API that allows you to create custom endpoints, enabling replacements for the Lync client to be built, without the requirement of having the Lync client installed on the machine. It is effectively an API wrapper around a SIP stack and RTP codecs.

Custom Menu Commands allow custom commands to be added to various menus in Lync. These are configured (via the registry) to start an application and pass thorough the SIP URIs of all participants in the conversation. There is a great walkthrough of this here.

Third-party Collaboration Application Integration enables Lync to kick off a web-based application for all participants in a conversation.

Command-line parameters tell Lync to perform particular tasks, such as opening a conversation window for a given phone number. The parameters are in the form of URLs, and so can be placed in web pages to provide a convenient way to perform actions in Lync.

UCMA 3.0 Core API is a fully managed API which allows you to build applications that register to Lync as endpoints. UCMA applications can log on to the Lync infrastructure as existing users (either by using their credentials, or by impersonation), or can be configured to use one or more Active Directory “Contact” objects, which can appear as contacts in the Lync client.

UMCA applications can create and respond to IM and Audio/Video conversations and conferences, publish and subscribe to presence, modify contacts and contact groups (if logged on as a user) and perform text-to-speech and speech-to-text operations.

UCMA 3.0 Workflow API is built on the UCMA 3.0 Core API, and can simplify building certain types of UCMA application. The API comes with a a set of Windows Workflow Foundation activities for performing tasks such as answering an incoming call, responding to voice or DTMF input, and asking the user questions.

The Lync Server 2010 SDK is used to create applications that act as filters – they can “plug in” to a front-end server and inspect, modify and reroute SIP messages as they pass through the server. The SDK includes the Lync Server API, documentation, sample applications and tools.

Filters are implemented as MSPL scripts. MSPL is a custom scripting language designed for this purpose. For more complex applications, the MSPL script can be configured to dispatch messages to a separate process, often a Windows service.